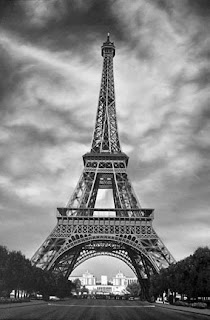 Ya know one place that I would like to go to? Paris! But for now I just have to settled for this brand new movie titled "Paris je t'aime". I haven't really got the chance to see the movie yet..But c'mon! Juliette Binoche is in it. How bad can it be? I love her esp. in Chocolat and Breaking & Entering. Sex and The City was shot in Paris for the finale and man that was just awesome. I still have each scenes playing at the back of my mind as if it was just yesterday that I first saw the episode.

Shikin is in Paris. I hate her! That whore!!! I'M supposed to be in Paris right now! Not her! Shopping in Dior, sitting by the river banks and drink latte.. Smoke until my face burst of flame..Hahah! Parisian do smoke a little bit too much huh? And don't get me started on the street fashion! Gosh! Suddenly the images of Kate Hudson in Le Divorce started to flash before my eyes.Love her in that movie. Bitchy but somehow sympethatic..

Shikin you better bring me something from Paris! I don't want Eiffel Tower miniature for god sake! I want Hedi Slimane or Raf Simmon. Yeah! Dream on..