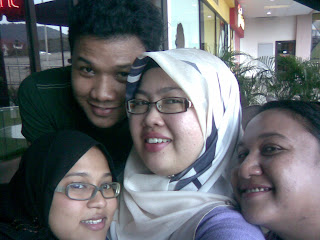 I spent the Chinese New Year holidays with my best girlfriends in the city. We had a lot of catching up to do..and not to mention endless joint of cigarette to smoke. A lot of things had changed since the last time we hung out together. Bayne has found herself a new boyfriend who has hair that is even better looking than hers. Sharina is coping with her recent lost. It was her brother from another mother. Shikin has got herself a gig in Lim Kok Wing and still dropping the word “London” at every given chance. Hanis couldn’t make it.. Well she’s kinda still stuck in Kelantan. We cannot blame her. She is from Kelantan.

As for me, I’m still here living my life and trying to find any good enough reason to kill my time around here. Nilai is the sleepy town where I work. Most of the weekdays are spent here in the office, teaching or just simply lying around in bed inside my little room at the hostel. Comes weekend, I take the 5.30 pm train on Friday and spend my weekend watching cables and try my best not to fall asleep before 12. That is what my definition of life at this very moment.

The whole day that we spent in KL last week was just awesome. We were like Sex and The City bunch. But mind you, I am not Stanford! It felt so right to be surrounded by people whom you trust, respect and love dearly. I find it kinda strange how everything around us had change. But when all five of us get back together, it feels so real and it feels like things are still exactly where we left it.

I made a promise not to bitch too much about my life..Well sometimes I just can’t help it.

Sharina had it worse. She lost a brother and has to confront all the dramas surrounding the tragedy. But I know she is strong enough to handle it. She will definitely emerge from all of these like a hero. I just know..

I haven’t met Bayne’s boyfriend but I saw some pictures. Seems like a nice guy. I only hope for one thing..For her to make the best judgment on a person and learned from things that has happened in the past. She’s a natural drama queen aitttee!!

Shikin has a new job, a new ride and a whole lot of items that she bought in London. I still think she’s a lucky whore! Hahaha=)

Hanis is happy too. She has a boyfriend in Jogjakarta. I hate her! I always hate her! Hahaha!

I guess it is safe to ssay that we're all hanging tough and doing alright..we just need to figure out ways to fight our loneliness without each other..

Weekend in The City