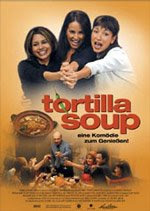 I’m not going anywhere this weekend. I just wanted to be at home and do all the homely stuff. But definitely not cooking! Haha=) I watched a movie on TV just now. It’s kinda old. A 2001 movie titled “Tortilla Soup”. I loved it. It was such a beautiful story about family, good food, relationship and all things that come in between. I also watched another 2001 movie, “Life Without Dick” on DVD. I guess everybody can tell from the title, it was a BAAAAAAAAAAAD movie! I pick up the DVD from the discount bin and paid four bucks for it. I bought it just because the lovely Sarah Jessica Parker is one of the co-stars. I believe she filmed the movie on Sex and The City hiatus. I still can’t get over the fact that it was really her in the movie because it was just awful. Feels like Gigli all over again!

And I am listening to this new girl, Yael Naim. She’s like Corrine Bailey Rae minus the ridiculous hair(shame about her husband tho..)I love the album. It’s calming and breezy. It makes me feel like I’m running free in the wild with the wind touching my face. But I’m not too keen on her remake of Britney Spears’ Toxic, the only letdown of her debut album.

It’s 4.30am. Kinda sleepy.. Maybe I’ll have another round of coffee and cigarette before calling it the “night”.

Or should I just turn off the light and hit the sack??

Before that.. I have one more question. Should I wear my vest to work on Monday? Haha=)