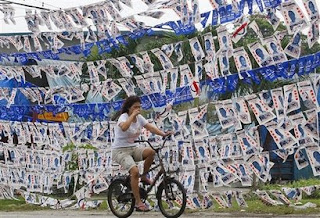 Election is over. O.V.E.R! I wanted to write about it so bad. But I just didn't want to risk sounding too dumb and shallow. I’m the kind of person who blogs about Burberry bags, Kanye West’s new album and strongly believe in my own ability to make good judgment on my own terms. Gawd! I’m not even sure what does that supposed to mean!

My point is, I might not have the level of intelligence to write about politics or anything close to that. But I can say that judging from the election and the way Malaysian voted, things are not looking good for us. If it continue on like this, let just say that our beloved country is in for a drastic change. I doubt it that it will be a good one because I believe that we’re doing just fine at the current state that we were right before the election. I am all Government (just in case you failed to read between the lines). Ask me why and my answer will be exactly the same like the one that was given to me by this really old man that I met at the bus-stop on the election day- Why do you have to fix something that is not broken?

Well I ended up giving the old man one ringgit for his bus fare. I liked him and I rarely speak to random old man on the street. But his point of view really intrigued me. For someone who has experienced Japanese and British occupation, I just couldn’t argue more.

We don’t need any fixing..

Heiso said…
no one is too dumb to talk about politic hanef.. either u want to talk about it or not je..either you care about it or not.. by the way, yeah the election is finally over. the result is a shock even to me who's quite an avid fan of our political scene. I guess it's true when u say why fix something that is broken. but maybe that is only on the surface. when we go deeper, we will see it. the truth.. the rot in the long wiring system of politic that may cause a short circuit sooner or later. i'm not saying i'm totally happy with the result. I only see it as a wake up call. a shot of caffein to a body on drowsy mode. sorry to bore you with my 2 cents worth! (^_^)
March 19, 2008 at 1:24 PM