on May 29, 2008
I don't know what the hell is wrong with Malaysian entertainment industry. Have they even heard of the word originality before? And as a Malaysian, I feel stupid each time people of my own country try to mimic things that has been done to death by other people (in Hollywood,UK or even Bollywood)and claimed it to be their own. That's just sad..

Don't get me wrong. I am a pure Malaysian to the bone and I love my country. But let's face it, our entertainment industry is still below the par and we're like a poor little baby trying to catch up in a marathon full of athletes. My point is we should take baby steps and try to find our own identity first before trailing the footsteps of all the bigwigs of entertainments industry. Yes, we do need some inspiration. The Beatles, David Bowie, Madonna, Julia Roberts, Katherine Hepburn, Michael Jackson, Steven Spielberg, Francis Ford Coppola, Oprah..and the list goes on. But inspiration is different from imitation. We drew inspiration and interpret it in our own unique ways. And Anita Sarawak trying to do Oprah on TV is definitely not one of it. Hilarious, but hell no! Paul Moss is Malaysia’s very own Simon Cowell? Come on! Oh, there’s one more! Radhi OAG went back to college ala Tommy Lee. Totally the case of chihuahua barking like a canine.. Heartbreaking..

I was flipping through the newspaper yesterday and came across this poster of a ‘new’ Malay movie titled ‘Apa Kata Hati’. Loosely translated as ‘What Your Heart Says' (Am I right? Correct me if I’m wrong.) I just knew right away that the movie poster is a localized version of a Hollywood movie poster. It was a rip off from this 2007’s teen-flick titled ‘She’s The Man’ starring Amanda Bynes. I seriously don’t know what the fuck is wrong with these people! They think we don’t watch Hollywood movies? Please!

I have evidence to prove it. See it yourself. 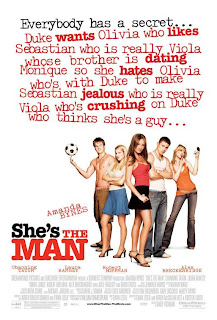 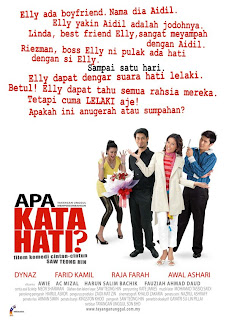 Unknown said…
U left another one, TV3's Maria Tunku Sabri Show -Wanita....it's exactly like The Martha Stewart show. Go check it out. Martha Stewart Show is evryday at 1am NTV7.

OLD BLOSSOM BOX said…
gosh, i totally get wat u mean... and as for that 'apa kata..wtf" movie, omg... cant they be more obvious? they are totally copying it, but just made it in BM.. i blame whoever the hell design the darn thing, and the peps that approved it.. totally stupid..
May 30, 2008 at 1:16 PM

Heiso said…
tch! tch! but i want to see the movie.. i think it's quite interesting despite they copied the hollywood poster.. err.. or is it the plot was also 'taken' from some other international movies?
June 2, 2008 at 9:09 AM