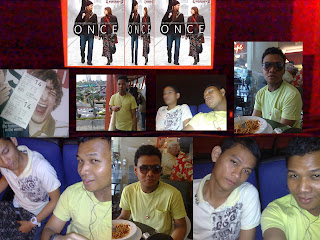 Like finally!! I managed to drag my lazy-ass to the theater and watched "Once". Ya know the indie movie with the awesome soundtrack? The one that won Oscar for Best Song?! Yes, that one. I made Zaki come along with me. I know he rather watch "Indiana Jones" or any other blockbuster movies that are currently showing in theaters.. Heheh! He felt asleep towards the end of the movie. Poor thing..

Hey, the movie was great! No kidding.. It's real, it’s raw and the music speaks the emotion throughout the movie. I have the soundtrack on my mp3 player since last year and it was not a surprise that I found myself singing word by word to each song throughout the movie. I seriously don’t care. The theater was not even half-full anyway. I guess the whole population of Mid-Valley was either at the Indian Carnival or still queuing outside for “Indiana Jones” tickets. Yes, there was this Indian Carnival in Mid-Valley Exhibition Center. Well the truth is Malaysian don’t really watch movies like “Once” in the theater.

I always watch indie movies or one of those festival favorite from all over the world. I like difficult and complicated movies that demand my thinking and sense of relevance. I needed that because my mind is so clogged up with ideas that I just need to get it out of my system.

That is one of the reason why I don’t go to the theaters that much. It’s easier to watch all these strange indie movies on DVD with my head-phone plugged in. I recently watched “Garden State”, “Babel”, “Crash” and “Maria Full of Grace”, all on DVDs. And these are movies from last year but man, they are unbelievable!
Movie Weekend in The City