I Call It Music 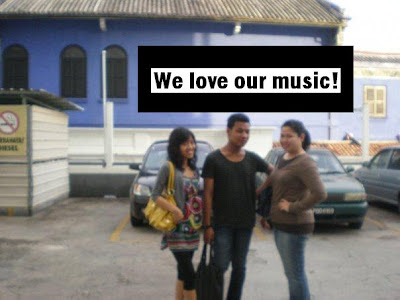 I have to think of something special for the avid reader of this little blog of mine because I don’t want to bore all of you with the same old shit. I figured that blogging is not that special anymore, just like photography (everybody is parading their nifty digital camera and call themselves photographer). Writing and blogging used to be very special and only those who can really write or at least have the ability to compose their thoughts into written form deserve their own space to share their gift. I am not trying too say that I am a really fucking good, deserving writer because I do have my own flaws, make grammatical mistakes and guilty as charge for relying on my MS Word thesaurus. But one thing for sure is, I have the passion. I have been wanted to write since god-knows-when, waaaay before Blogspot and Xanga. I remember before blogging became the craze all around the globe, I used to register myself to this very little known website opendiary.com. Opendiary is almost like the blog that we have today, minus all the fancy stuff. It was life journal more than anything. I registered with a fake name so that I could share secrets with strangers. Come to think about it, that was a little scary.

So I read this really great music article from The Star yesterday. It was about music and how the gender defines the preference towards certain kinds of music. I was really drawn to the article because I just don’t understand why there should be any labels and different standards for music choices for different groups of people. Scissors Sister for gay. Joni Mitchell for boho-girls. Miley Cyrus for teeny boppers. Death Cab For Cutie for indie kids.

According to the article that I read, male and female have different reasons for their music preferences. Female listeners mainly choose their favorite music based on the lyrics and catchy melodies. As for male listener, they like certain songs or artiste based on the profile, history and events that relates to it, like how Bob Dylan recorded his albums at his farm in Minnesota and how he changed the songs’ keys to A from E.

I normally choose my music naturally and very much instinct-driven. I listen, absorb the feel and emotion and later decide whether I like it or not. It can be any song, from any artiste, genre and it can be song from decades ago. Like the way I suddenly decided to listen back to Joni Mitchell and tell all my friends how much I love the album “Blue”. Or how much I love Ne-Yo’s Go On Girl despite the song’s lack of publicity and warm response even from his fans. I like R&B but I won’t include R&B within the list of my favorite music genre. That is why I consider myself as a universal listener. I listen to good music. Regardless of the age of artiste who sang the song (Meet Miley Cyrus anyone!?) or whether it really belongs to certain genre of music that is really my cup of tea.

And I perfectly understand if some people listen to music just because they want to standout from the crowd. Some people pretend to like certain kinds of music just because they thought it will be cool to listen to them. I wonder why people have to do that. Music is not the thermometer of hotness and conformity. It supposed to be enjoyed with no boundaries or hidden motives. It really makes me sick the way people boast about having his/her limited edition Bloc Party’s CDS shipped directly from Japan. Or how much money they spent on The Beatles’ B-sides catalogue.Come on!

I like Joni Mitchell, Carole King, Bic Runga and Tori Amos but that doesn’t make me an angry female with seventies headband around my forehead. I listen to Coldplay, Razorlight, Belle & Sebastian, The Ting Tings and Bright Eyes but at the same time I have no problem admitting my fondness towards Miley Cyrus, Alicia Keys and John Mayer (I was referring to their music of course). And you say you’re still not convinced?! Here’s the list of my recent downloads:

Bert Steve said…
hahah funny, the camera-carrying-disease. guess people nowadays have too much to spend.

and yeah there was not even the term "blogging" in 1999. i remember my old websites were all GIF images and named something like, "Welcome to Herbert's Homepage" hahaha!

nice one Anep i know U know very well about your music ;) recently there's a craze i just learned about listening to Paramore. i fucking hate it, this emo image is gettin into me nerves! i don't hate emo but the just have to carry the image to be what they want to be, and that's a wannabe attitude.
August 1, 2008 at 8:27 PM

Anonymous said…
where was that pic taken? the place is unfamiliar.

just because i listen to myley cyrus and sometimes watch hannah montana doesnt make me a teenager. kan?

other times i go for more 'mature' music and tv shows too. like sense and sensibility. does that make me old?

Fash said…
exactly. these amateurs spend thousands of ringgit for a good camera when their photographic skills are still questionable.

its entertaining to see all these school students marching to Berjaya Time Square in their complete emo get-up. i know some of them are not even sure what the word "emo" really means. hahaha=)
August 5, 2008 at 9:49 AM

Fash said…
hana: the picture was taken at our hotel in penang. like 3,4 months ago.

sometimes people give us label based on what we do and what are things that we are into.