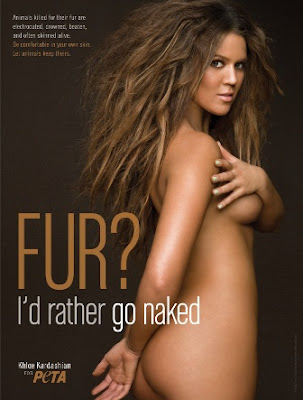 Khloe is the latest star of PETA's "I rather be..." ads campaign. She admits to wearing fur in the past and has decided to swear off fur for good. Way to go Khloe!

She's like my fave Kardashian sister in Keeping Up With The Kardashians. Maybe not as hot as Kim but she's like the firecracker, the feisty ones in the family. She has potty-mouth just like me. Ha-hah!

I remember how the phone-throwing Naomi Campbell did the same ads in the 90s. She walked the runway in something that looked like road-kill a few weeks after the release of the campaign.

But I hope Khloe wont do the same thing because from what I heard, their clothing label Dash, does actually carry some suspiciously furry- collared jackets. That and the fact that the whole family still wear fur.

Definitely something to think about.

Song playing inside my head: Travis's Something Anything.
Fashion

Jenice said…
khloe I can't believe how gorgeous you look. I am so proud of you for being so brave. I watch you and the rest of your KLAN and I have to say I love everyone of you, especially you for daring to speak your mind. You appear to be so hard and edgy yet at the same time you always make a point of always telling your family how much you love them, your not afraid to show your softer side.