Fashion Fighter! Thailand vs Asia- The Best of Malaysia 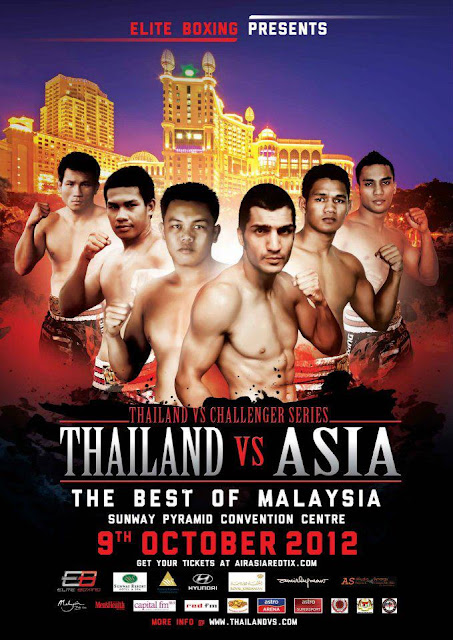 I have never been to any Muay Thai or fighting competition before. The one happening tonight is a bit more special because there will be fashion involved which is also the reason why yours truly will be there. Okay! That and the after party that they will be having at The Butter Factory. Winkwink*

Thailand vs Asia - The best of Malaysia will be collaborating together with Bumiputera Designer's Association (BDA) led by Mr. Bon Zainal where the classy fashion designers will each create an elegant "batik" outfit for their celebrity muses in theme with promoting Malaysia's arts and cultures as the red carpet event of Thailand vs Asia will be broadcast to over 100 countries internationally through network partners such as ESPN, Starsports, Eurosports, TGn and Astro. Highlighting fashion even further is Elite Boxing's Official Designer, Amir Luqman adding a Batik Fashion Show and dressing up the Convention Centre with unique batik designs.

In addition to a night already filled world class entertainment, Thailand vs Asia- The Best of Malaysia ends with a glamorous afterparty with a guest list including KL's celebrities and socialites at the newly opened, The Butter Factory Kl by JV Entertainment. All ticket purchasers and attendees of Thailand vs Asia will be given free entry to continue the night of fun and excitement with the opportunity to meet the athletes from Thailand vs Asia.

Taking center stage in Thailand vs Asia is Elite Boxing's Official Brand Ambassador & Host Diana Danielle who was introduced during EB's first press cionference at Sunway Resort & Spa tonight! Alongside is fitness enthusiast and co-host, Fay Hokulani who will also be spearheading the afterparty hosting.