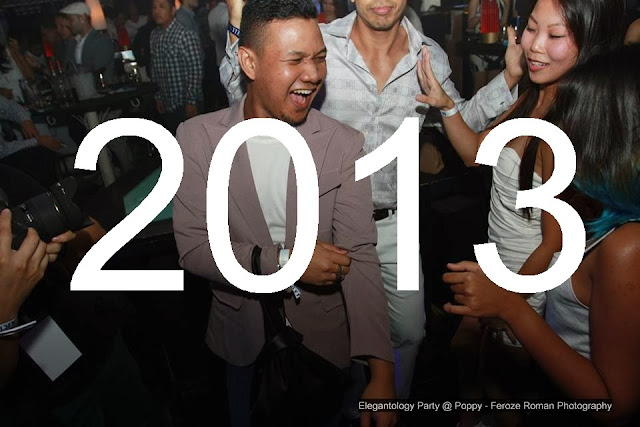 So this is how it feels like (Photo: KL Confidential)

I feel so blessed for a fact that everything has very much improved in 2013. I never missed my credit card bills, I bought back all the things that I've lost in 2012 and most importantly I finally got rid of the 'parasite' which invaded not only the space in my house but also my heart for the most part of 2012.

I learned a lot of lessons. I decided to finally 'grow-up' (bidding farewell to my twenties and all) without feeling the need to fill the empty space in my life with people regardless of their next-to-zero purpose of existence. I am now enjoying my own company more than ever. A weekend spent at home writing and watching movies turned out to be way better than drunk-dancing with a bunch of sweaty 'scensters' who claim to be fans of both Calvin Harris and Daftpunk.

I still go out but mostly for work (product launches, fashion party, event review etc). These days, dressing up and to actually drag myself out of the house is not as easy as it used to. I didn't even go out partying on the New Year's Eve. Well we made plan but my friend fucked up. I wasn't too keen on going out anyway. It was just the idea of being alone when the clock struck at 12 that scared me the most. Lucky for me because that didn't happen. Thanks to a new friend who live nearby and got his NYE plan all fucked up like I did.

2013 also thought me about people and how if you were not being careful, you could get sucked into a hole full of jerks. I've surrounded myself with jerks for far  too long and for whatever reason I let them stay to suck the life out of me. Last year, I finally decided to let them go one by one and climb out of the dark hole of jerk-dom. I will never again put too much trust on people because I discovered that the only two people that I can fully trust are my parents. Well maybe your siblings. But in my case... not really...

Anyway, the whole point of celebrating the New Year is so that one can move forward and stop dwelling on the past. I pray for a better year with  really great things taking place and a life that I always wanted to finally take off.