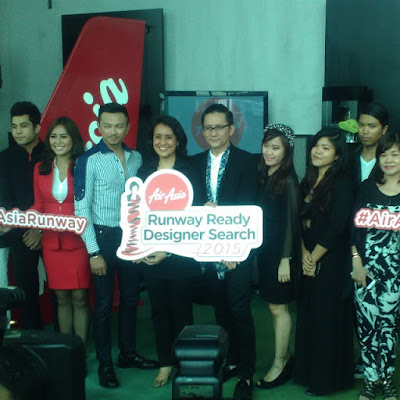 AirAsia has just announced the launch of the AirAsia Runway Ready Designer Search, a part of the airline’s continuous commitment to develop the talent of tomorrow. AirAsia is the Preferred Travel Partner for the upcoming KLFW RTW 2015 and in a strategic collaboration with the renowned KL Fashion Week team, this initiative aims to help create a platform for young aspiring talents in the fashion industry to kick start their journey and realise their dreams to be a part of the local and international fashion scene.

10 young designers will be able to showcase their creations on the prestigious runway stage of KL Fashion Week RTW 2015 and three best designers will be revealed at the end of the search and claim the title of ‘AirAsia Most Promising Designer 2015’, along with other prizes which include AirAsia Runway Ready Designer Search trophy, return flights to Tokyo, Sydney and Hong Kong,up to 60,000 AirAsia BIG Points each, a chance to be part of other Fashion Weeks in the region and more.

Fashion designers from around the region will also be flown in by AirAsia to be part of KLFW RTW2015, and this will also provide the 10 young designers with an opportunity to meet and learn from them.

In addition to Aireen Omar (CEO of AirAsia) and Andrew Tan (Founder of KLFW RTW), fashion industry heavyweights Khoon Hooi and Jovian Mandagie as well as Khairul Abidin Ishak (Editor of EH! Magazine) was announced as the judging panel for the very first AirAsia Runway Ready Designer Search 2015. This designer search is open to any young aspiring fashion designers with or without formal fashion training, and no older than 28 years old in 2015. Interested designers can enter by completing the registration form which can be downloaded at klfashionweek.com/airasiarunwayready and submit their sketches. Submission deadline will be before 5.00PM (GMT +8) on 12th June 2015.

The Top 25 shortlisted applicants will be notified to present their design collection aptly themed ‘Asean’ to the panel of judges. The Top 10 which will be featured at the KLFW RTW 2015 runway will then be selected through this session. AirAsia has been involved in numerous talent and youth development initiatives by creating opportunities and providing the platform to achieve success, recognize their own strengths and potential. Most importantly, AirAsia has enabled many young talents to realize their dreams to compete at the highest levels such as Zulfahmi Khairuddin, MotoGP rider and international squash player Low Wee Wern.