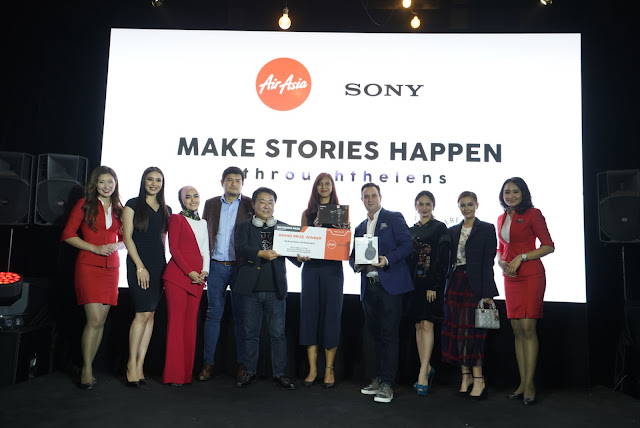 Following a 10-week global search, the joint ambassador for AirAsia and Sony was revealed at a star-studded media event and announced to be 29 year old Aisha Nazar from Kuala Lumpur. Her visual stories stood out amongst over 700 submissions from around the world, clinching her a one-year joint ambassadorship prize with two leading travel and technology brands.

After  11 years now since AirAsia started flying long haul, low cost, enabling consumers to travel further, for less, it is heart-warming to see so many visually compelling travel stories from its guests shared through this inaugural joint ambassador search with Sony. The passion for photography and travel has advanced tremendously, as it is now possible for everyone to produce high quality photos with amazing aesthetics to tell inspiring travel stories with the latest visual technology.

To further inspire travelling, AirAsia will be running a special two-week promotion to ALL destinations with fares on sale discounted by up to 70%. Guests can book online at airasia.com from now until 28 October for immediate travel or until 30 June 2019.

The newly appointed joint ambassador for AirAsia and Sony, Aisha Nazar, will soon travel to Tokyo on AirAsia’s award winning Premium Flatbed for an exclusive tour at Sony’s technology lab to experience their future technologies and inventions which are yet to be publicly released. Besides this money-can’t-buy experience, she will also undergo a full year apprenticeship with Sony and take home the latest full frame mirrorless camera Sony Alpha A7 III K as well as Sony h.ear on 2 wireless headphone, both valued at over RM10,000.

As an extension to #ThroughTheLens campaign, this joint ambassador search with Sony has received more than 700 photo submissions from all over the world featuring AirAsia destinations which can be viewed at throughthelens.airasia.com. Nine other shortlisted finalists will also receive special prizes which include AirAsia X flights and a Sony RX100V camera valued at RM4,299 each.

Renowned Malaysian artistes Elfira Loy, Alvin Chong, Izara Aishah, Zahirah MacWilson and Che Puan Juliana Evans were also announced as the faces of AirAsia’s #ThroughTheLens campaign inspiring travel videos which will see them flying to popular AirAsia destinations such as Xi’an, Tokyo, Amritsar, Taipei and Seoul. Fans can look out for these videos on airasia.com/throughthelens